Check out Heather Mclean’s analysis of the role of the arts and culture in the Toronto mayoral race in the most recent post on the Socialist Project’s The Bullet. Read it here: http://www.socialistproject.ca/bullet/420.php

Join AGO Workers in Calling For Good, Full-Time Jobs

After spending $276 million dollars on a Frank Gehry-designed expansion in 2009, the Art Gallery of Ontario (AGO) laid off 29 workers.  This year the jobs of 39 additional workers are threatened.  Meanwhile increasing numbers of AGO employees are hired on a part-time or casual basis.  According to the Ontario Public Service Employees Union (OPSEU), the union that represents AGO employees, in 2005 the gallery had 136 full-time and 159 part-time staff. Today there are 177 full-time staff and the number of part-time staff has grown to 266. Toronto’s biggest booster of the virtues of creative employment (which often ends up being casual or part-time), Richard Florida, is appointed by the Province of Ontario to serve on the Board of the AGO.

Hamilton Joins the Fight Against the Creative City!

Posted on May 3, 2010 by creativeclassstruggle | 10 comments

Check out the great new flyer from Hamiltonians Against Neighborhood Displacement (HAND) about how creative city policies are causing displacement in Hamilton, Ontario.  If you are interested in contacting them please let us know. 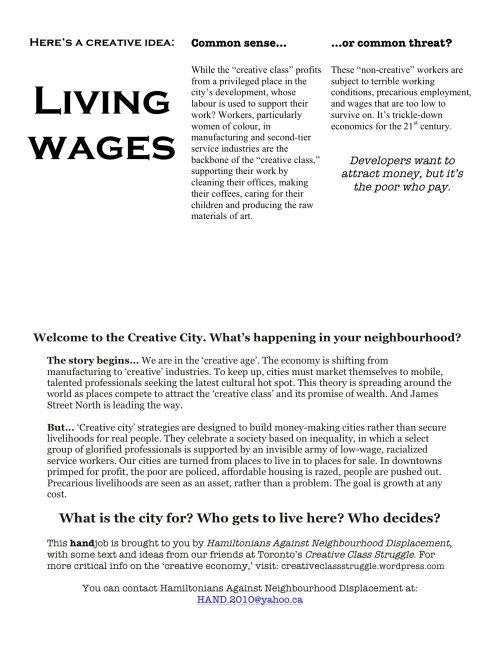 Carrotworkers’ Collective is a London-based group working to understand and challenge the insidious culture of unpaid work – including ‘voluntary’ internships – that has swept over the creative and cultural sectors. Their resistance is long overdue.

Activists in Hamburg, Germany are successfully resisting the redevelopment of their city.  Read their manifesto against creative class policies at Not In Our Name, Marke Hamburg’s blog.  The manifesto is translated into English here.

Read more at Der Spiegel or listen to a podcast of CBC’s Q.

According to the conference’s website, these are exciting, new boundary blurring partnerships because…

“The new imperative to collaborate is rooted in the need to solve persistent multi-dimensional problems and a growing appreciation of how collaboration fuels innovation. It is blurring boundaries between audience and creator, hgdksl anoi ksdjhf….”

Let’s step back and ask:

Whose success are these stakeholders discussing?

Is everyone invited to the table to collaborate?

As people ‘break down’ barriers to create ‘new platforms’ for dialogue about cities in these workshops – what kind of cities are they envisioning?

Isn’t work becoming increasingly precarious or unavailable? Isn’t housing increasingly unaffordable for most people? Aren’t social services for the poor increasingly underfunded and overburdened? Is this the “collaboration for collective interest” that conference planners envision?

What is the city for? Who gets to live here? Who decides?

Creative Class Struggle urges you to question the Creative Cities phenomenon routinely celebrated at Creative Places and Spaces and in cities across the world.

Thanks for visiting. Come back soon! 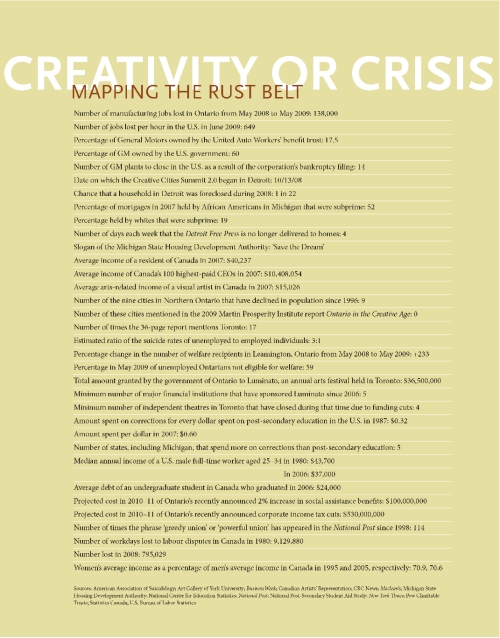 Nice Index, or How to Win Friends by Ignoring People
By Joshua Akers
joshua.akers@utoronto.ca

It is rare for Albuquerque, New Mexico to receive national attention. Typically it is tied to the odd cable news obsession, such as the “Runaway Bride” Jennifer Wilbanks of Mason, Georgia calling from an Albuquerque pay phone and falsely claiming a Hispanic male kidnapped and assaulted her, or the strange political machinations of the Bush administration firing the state’s U.S. Attorney.

So when Richard Florida declared Albuquerque the number one medium-sized city in the U.S. in his national bestseller The Rise of the Creative Class, the city and the state took notice. The city also ranked eighth overall, with high marks in technology, talent and tolerance. Civic leaders fell in love with Richard Florida; newspaper editors demanded stories on this newly discovered creative class. People who had not read the book talked about how creative the city was. By extension, what they were really talking about was how creative they were—how tolerant they were, how they loved diversity. It was as if living in Albuquerque somehow made one creative, whether or not that was Florida’s point. But, of course, flattery is powerful: people rarely reject what they want to hear about themselves, and no city is going to point out the faults of a study that praises it. Seven years later, the Albuquerque Economic Development Corporation still prominently displays the ranking on its website, along with a link to Florida’s 2002 article in Washington Monthly. 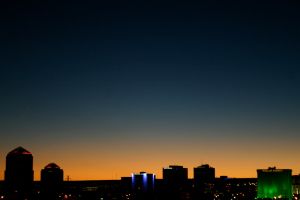 There are many beautiful things about living in the desert, and Albuquerque in particular, but Florida’s measurements miss nearly all of them. The diversity of the area was not spurred by some influx of high-achieving, well-educated and progressive people; it developed over centuries of subsistence, conquest and colonization. One of the rarities of the state is the immediacy of its colonial past and the necessity of confronting this legacy on regular basis. It is still relatively fresh in historical terms. The state’s 19 pueblos and three Native-American Nations and the remnants of their past are a constant reminder of the exploitation that has continued for centuries in the Southwest, as the territory has passed from pueblos and tribes to conquistadors, revolutionaries and the hands of empire. New Mexico and Albuquerque have become a haven for those enmeshed in history and a draw for those looking to escape it.

But this history is not without consequence. New Mexico and Albuquerque often rank at the bottom of other national indices. Governor Bill Richardson’s quixotic quest to become President effectively ended in an appearance on Meet the Press with the late Tim Russert in May 2007, when Russert laid bare the reality of life for many in New Mexico:

As you well know, they rank states in a whole variety of categories from one being the best, 50th being the worst. This is New Mexico’s scorecard, and you are the governor. Percent of people living below the poverty line, you’re 48; percent of children below, 48; median family income, 47; people without health insurance, 49; children without health insurance, 46; teen high school dropouts, 47; death rate due to firearms, 48; violent crime rate, 46. You’re the very bottom of all those statistics of all 50 states.

Florida’s creative class is popular in New Mexico and elsewhere because the index obscures the overwhelming data illustrating the contradictions of the system Florida has chosen to celebrate—a system that cannot function without extreme levels of inequality.

The beauty of an index is its simplicity: you take a few variables, calculate a number and rank. Multiple data sets are blended into a “Creativity Index” or a “not-so-creative index” or a “reliable-ranking-produced-by-a-social-scientist index.” The purpose of the index is to measure only certain variables—in this case, those associated with the creative class. To accomplish this, one has to cancel out or ignore two-thirds of the city’s population. The act of isolating the creative class and ranking the locations where its members live depoliticizes this group of often middle-class workers, and their choices, by emphasizing the individual. It allows employers free rein to exploit these workers by emphasizing the benefits to the local economy, and it encourages government to focus its limited resources on those with skills and means while ignoring those most in need. One example is the continual support of Intel, a tech firm that helps increase the city’s score in Florida’s creativity index. In late 2004, Sandoval County approved a $16-billion industrial revenue bond for Intel. The bond was one of the largest in the world at the time for a private company and came with no guarantees of expansion. In fact, in the past two years Intel has cut over 42 percent of its work force. Beyond the loss of about a billion dollars in tax revenue over the bond’s term, the pollution-heavy, water-intensive wafer production process poses a long-term threat to the arid locale’s environment.

Florida’s index is perfect for local politics and marketing. There is no chronic poverty, failing schools, superfund sites or water shortages. There are only rankings, a checklist of sorts: high tech? Got it. Innovation? It’s filed at the patent office. Creativity? Gallery and bars, check. The problem is not the method or the results that Florida presents; it’s what this method obscures.

The creative class may have risen, but who and what have fallen? If over 30 percent of the American workforce is in the creative class, who makes up the other 70 percent, the not-so-creative class? The power of the index is that it obscures this majority. And even if we agree to ignore that 70 percent, the tenuous position of many in the creative class itself is also ignored. Moving outside the ‘creative core’ of scientists and successful artists that Florida depicts and into the creative support sector, the work becomes less stable and more demanding. Tech workers bounce from contract to contract with inadequate or non-existent health insurance coverage; retirements depend on the performance of the market and the asset mix in a 401(k) or other investment fund. Many have to work multiple jobs or take on increasing workloads as companies cut employees to decrease costs. These new arrangements are acknowledged by Florida and perversely celebrated at the same time.

The criticisms presented here get at the surface of Florida’s argument—the inability of his indices to measure reality. Obscured by the shiny packaging and familiar message of “growth is good” is a dangerous and powerful politics that seeks to utilize the limited funds of the state to enrich a few, with little concern for the environment, workers and marginalized people. Others have been more adept in deconstructing Florida’s seemingly apolitical approach to celebrating exploitation and challenging the assumptions within his work. As for this dispatch, it is a brief glimpse at Albuquerque, a city that for all its beauty, has grabbed Florida’s missive on growth as a prescription for health. In New Mexico and the Southwest, Richard Florida and his Creative Class camp are just another group searching for gold and property in a lineage of conquest and exploitation.

Welcome to the Creative City

Posted on May 2, 2009 by creativeclassstruggle | 4 comments

Download a PDF of Welcome to the Creative City

Heck of a Job Richard

Not content to live solely off public tax dollars, Richard Florida has extended the consulting expertise of the Creative Class® Group to numerous private sector clients. While the complete list of clients is not available to the public (who pay Richard’s base salary at the University of Toronto of $346,041.48 CAD) we can determine a few clients from his website.

From this list it is apparent that the corporate subsidies allocated to the Creative Class® Group pale in comparison to its illustrious clients. For now, let’s take a gander at the financial sector.

Evidently the Creative Class® Group was teaching these banks one of its fundamental yet unmentioned principles: corporations succeed when they receive vast quantities of unaccountable funds from the state. Richard gets richer too.

Or you can join Creative Class Struggle for free! Send us an email at creativeclassstruggle@gmail.com.

We can’t offer you a limited edition DVD, but we can offer the opportunity to fight back against academic profiteering.

Posted on April 13, 2009 by creativeclassstruggle | 6 comments

Thanks to Canadian House and Home for bringing us this insightful video tour of Richard and Rana Florida’s Rosedale home. Click here to view.

Want to read more? Check out the recent article from the Globe and Mail. “I have to say it being on a cul-de-sac overlooking a ravine was very attractive to me,” Mr. Florida says. “I thought how safe, how quiet, how perfect.” Read more about the Floridas’ perfect home here.